Canada Silver Cobalt Works Inc. (TSXV: CCW) (OTC: CCWOF) (Frankfurt: 4T9B) (the “Company” or “Canada Silver Cobalt”) is pleased to announce that Mr. Matt Halliday, P.Geo., has been promoted to the position of President and Chief Operating Officer (COO) of the Company, in addition to his duties as VP-Exploration, as Canada Silver Cobalt prepares to aggressively ramp up drilling at Castle East to fully leverage a growing high-grade silver discovery adjacent to three past producers in Gowganda, 75 kilometers southwest of Kirkland Lake.

As a second drill rig is quickly added to this discovery as part of a new planned program encompassing 50,000 meters of drilling in 2020, Halliday will direct and supervise all project operations for Canada Silver Cobalt in his new role as President and COO. He will also immediately further build out the geological, engineering and environmental team with the goal of completing permitting and construction of a ramp to the rich Robinson Zone in 2021.

Based on reliable historical reports and internal data, management believes Castle East may represent the most significant new grassroots high-grade silver discovery in the Gowganda mining camp, and the broader Northern Ontario Silver-Cobalt district, in at least 40 years.

Mr. Halliday first joined Canada Silver Cobalt late last year from Kirkland Lake Gold where he served as resource geologist. A graduate of Dalhousie University in 2007, Mr. Halliday honed his skills for almost eight years with SGS Geostat, known as global leaders in orebody modelling and reserve evaluation. In 2016 he was part of the SGS team that pushed machine learning into the geological realm and claimed top prize in the $1 million Integra Gold Challenge.

For more than a dozen years Mr. Halliday has focused on resource reporting and modelling while also gaining abundant experience with advanced field exploration including major drill programs in Ontario, Quebec, Newfoundland-Labrador, Nunavut and Alaska. With SGS he also enjoyed success in a business development capacity.

Mr. Halliday commented: “I’m excited to take on new and expanded responsibilities to help guide Canada Silver Cobalt to the next level as the leading vertically integrated silver-cobalt company in a prolific district that stretches for 130 km.

“We not only have the grade at Castle East but the opportunity for tremendous scale given the extent of untested ground in a camp where it appears the oldtimers, despite mining around 70 million ounces of silver, took only the low-hanging ‘fruit’. We’ll have a second drill rig turning by about July 15 as we begin to greatly accelerate this program based on multiple positive indicators.

“We already have exceptional talent within CCW, which we’ll be harnessing to an even greater extent, but it’s my mission to quickly build a ‘Dream Team’ that will execute flawlessly for shareholders,” Mr. Halliday continued.  “This may also include a new VP-Exploration as I focus on making sure we deliver on a dynamic vision for this company in Canada’s silver-cobalt heartland. We will use the Castle East discovery in unlocking the value of the adjacent Castle mine and all other company assets including Temiskaming Testing Laboratories, following a path that helped build Agnico Eagle – former operator of the Castle mine – into the mining giant it is today.”

The Robinson Zone discovery features a very high-grade Inferred resource of 8,582 g/t Ag (250 oz/ton) in areas 1A and 1B for 7.56 million ounces of silver in a total of 27,400 tonnes of material, using a cut-off grade of 258 g/t AgEq. The discovery is wide open for expansion and the Inferred resource does not include a second high-grade silver vein intersected 95 meters below the Robinson Zone. Cobalt is also an important component of this discovery.

The Mineral Resource estimate is dated May 28, 2020, and was independently prepared by GoldMinds Geoservices Inc. in accordance with National Instrument 43-101. A Technical Report with respect to the Mineral Resource estimate will be filed within 45 days from May 28, 2020, in accordance with NI 43-101. The Company reminds investors, as per NI 43-101, that mineral resources that are not mineral reserves do not have demonstrated economic viability.

Mr. Halliday is replacing Mr. Frank Basa as President while also assuming the new position of Chief Operating Officer. With his many years of successful experience in the Northern Ontario Silver-Cobalt district, including his time with Agnico Eagle, Mr. Basa will continue as CEO of Canada Silver Cobalt while responsibilities for day-to-day operations are assumed by Mr. Halliday. “Matt is supremely qualified and has the energy, the expertise and the leadership skills to take CCW to a whole new level,” stated Mr. Basa. “We are entering a major growth period and it’s time to build out the team to take full advantage of this discovery and an exciting new bull market in silver.” 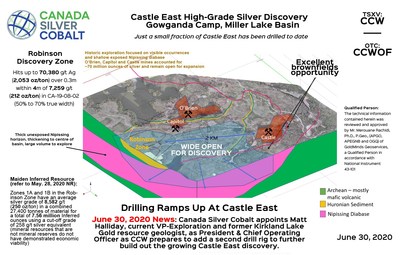 The technical information in this news release was prepared under the supervision of Mr. Merouane Rachidi, Ph.D., P.Geo., (APGO, APEGNB and OGQ) of GoldMinds Geoservices, a qualified person in accordance with NI 43-101.

Canada Silver Cobalt’s flagship Castle mine and 78 sq. km Castle Property features strong exploration upside for silver, cobalt, nickel, gold and copper in the prolific past producing Gowganda high-grade Silver-Cobalt District of Northern Ontario. With an important new discovery at Castle East, underground access at the Castle mine, a processing facility (TTL Laboratories) in the nearby town of Cobalt, a proprietary hydrometallurgical process known as Re-2OX, and the Beaver and Violet properties, CCW is strategically positioned to become a Canadian leader in the silver-cobalt space.