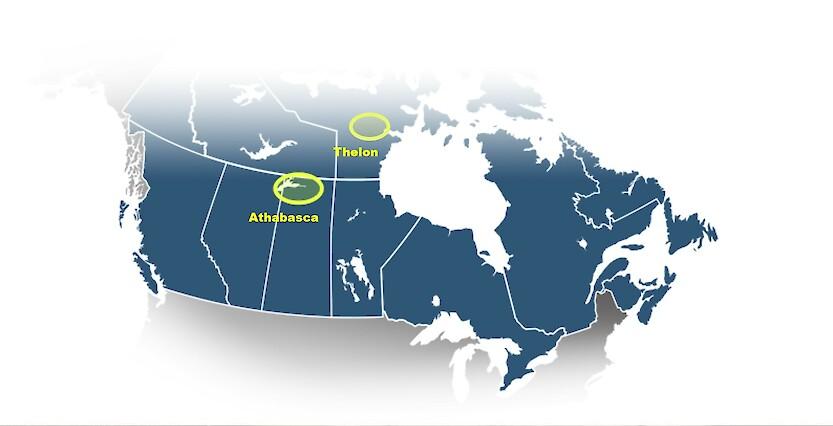 Forum Energy Metals (TSX.V: FMC - OTCQB: FDCFF) is an established uranium explorer searching for high-grade deposits in Saskatchewan’s Athabasca Basin, home to the most valuable uranium real estate in the world. The company is also pursuing exploration in Nunavut’s Thelon Basin, which may be the most prospective region for discovering new, high-grade uranium deposits outside Saskatchewan. With a strong local and regional presence, Forum took advantage of weak markets to broaden its commodity exposure by adding a diverse portfolio of energy metals exploration projects in the copper, cobalt and nickel space.

Forum Energy Metals (TSX.V: FMC - OTCQB: FDCFF) is an established uranium explorer searching for high-grade deposits in Saskatchewan’s Athabasca Basin, home to the most valuable uranium real estate in the world. The company is also pursuing exploration in Nunavut’s Thelon Basin, which may be the most prospective region for discovering new, high-grade uranium deposits outside Saskatchewan. With a strong local and regional presence, Forum took advantage of weak markets to broaden its commodity exposure by adding a diverse portfolio of energy metals exploration projects in the copper, cobalt and nickel space.

Previously explored by Cameco between 2008 and 2012, this prospective ground hosts two uranium discoveries made by geologist Rebecca Hunter, who recently joined Forum’s exploration team. Cameco later abandoned the claims due to the decade-long period of low uranium prices during the post-Fukushima period. Forum’s claims surround Orano Canada’s 133-million-lb Kiggavik uranium deposit. Orano, formerly known as AREVA, completed six years of pre-development engineering, environmental and community engagement studies from 2008 to 2014, prior to placing the project on care and maintenance.

Cameco completed 36,000 m of drilling in 135 drill holes. After reviewing Cameco’s data, Forum’s technical team determined the Tatiggaq deposit to be the primary exploration target. Tatiggaq is found within a large gravity anomaly that remains open along strike for 1.5 kms and at depth. Previous drilling by Cameco identified results as high as 2.69 percent uranium oxide over 7.9 m, including 24.8 percent uranium oxide over 0.4 m at a depth of approximately 200 m.

Forum recently completed a baseline archaeological study, ground gravity surveys, a location study to determine the most suitable location for an exploration camp, and has begun a community engagement dialogue with the Hamlet of Baker Lake. Forum is evaluating options to commence exploration drilling in 2023.

The property is located within 10 kms of Cameco’s Rabbit Lake uranium mill and within 30 kms of Orano/Denison’s McClean Lake uranium mill. Following the completion of its successful winter 2022 drilling program, which discovered anomalous uranium in all four holes at the Gizmo target. Forum recently received results of an airborne electromagnetic (EM) and magnetic survey to augment structural interpretations and precisely locate the EM conductors. The company is evaluating these results to identify new target areas for follow-up gravity surveys and diamond drilling.

Richard Mazur is an executive and geoscientist with over 45 years of Canadian and international experience in the exploration and mining industry as a project geologist, financial analyst and senior executive on uranium, gold, diamonds, base metals and industrial minerals projects. Rick founded Forum in 2004. He is also a director of Big Ridge Gold Corp., Impact Silver Corp. and Midnight Sun Mining Corp.

Mazur graduated with a B.Sc. in geology from the University of Toronto in 1975 and obtained an MBA from Queen’s University in 1985.

Dr. Rebecca Hunter has over 15 years of experience as a uranium exploration geologist in Saskatchewan and Nunavut. As a project geologist for Cameco from 2005 to 2016, Hunter led the Turaqvik-Aberdeen exploration project, where the high-grade Tatiggaq and Qavvik uranium deposits were discovered adjacent to Orano’s (formerly AREVA) Kiggavik uranium project in Nunavut. Hunter completed her PhD at Laurentian University, which focused on the litho-geochemistry, structural geology and uranium mineralization systems of the Tatiggaq-Qavvik uranium trend in the Thelon Basin. She was recently appointed senior geologist and will continue her lead work on this project as a member of Forum’s exploration team.

Ken Wheatley is a professional geoscientist with the Association of Professional Engineers and Geoscientists in Saskatchewan. He has 42 continuous years of uranium exploration experience in Canada, including AREVA Resources Canada (now Orano), one of the world’s largest uranium exploration and production companies, and Uranerz Exploration and Mining Limited. His established track record of mineral discoveries includes eight uranium deposits, four of which became producing mines in the Athabasca Basin, Saskatchewan. Wheatley graduated with a BSc. from Laurentian University in 1980 and an MSc. from the University of Saskatchewan in 1985.

Anthony Balme is an active participant in several public and private overseas resource ventures. He is the managing director of Carter Capital Ltd. and Lymington Underwriting, two private UK investment funds. Balme identifies early-stage opportunities in the resource sector and arranges financings to advance projects to the public market. Balme is also a director of AIS Resources, a TSX.V exploration company.

Paul Dennison worked for 27 years in the front-end of three leading investment banks: Credit Suisse, Merrill Lynch & Deutsche Bank. His focus was capital markets origination, underwriting, sales and trading in all regions outside the Americas. Thereafter, Dennison managed his own asset management company for 12 years, which was licensed in Singapore, Switzerland and the United States. He is currently based in Zurich and Singapore with his own firm, specializing as an introducing broker, souring international investment capital for clients.

Janet Meiklejohn is the principal of Emerald Capital, a consulting company providing CFO, strategic, valuation, corporate governance and marketing services to high-growth companies. She was formerly VP of institutional equity sales focused on the mining sector with several Canadian investment banks including Desjardins Securities, National Bank, Salman Partners and Macquarie Capital from 1997 to 2015. Meiklejohn grew up in Saskatchewan and has a close personal interest in the development of the uranium industry in the province. She is currently chief financial officer of Empress Royalty Corp and serves as VP of finance and investor relations with the Very Good Food Company, a leading plant-based food technology company based in British Columbia.

David Cowan practiced corporate and securities law for over 35 years, most recently as a Partner in the law firm McMillan LLP, before entering semi-retirement. He continues to serve as Forum’s in-house counsel and advises a select group of companies on securities and corporate law matters. He also serves as an independent director for a number of TSX.V-listed companies, primarily in the mining sector.

Larry Okada is a member of both the Canadian Institute of Chartered Accountants and the Washington CPA. He practiced with his own firm of Staley, Okada and Partners until PricewaterhouseCoopers LLP acquired his firm. Okada serves as boardmember with a number of resource companies and is Forum’s audit chairman.

Michael A. Steeves has been involved in the mining industry for over 45 years. He is president and chief operating officer of Zazu Metals and has previously held executive positions with Glamis Gold, Coeur D’Alene Mines, Homestake Mining and Pegasus Gold. Steeves also worked for a number of years as a mining analyst. He holds a master of science degree in earth sciences from the University of Manitoba and is also a chartered financial analyst.

The information contained here is for information purposes only and is not to be construed as an offer or solicitation for the sale or purchase of securities. Readers should conduct their own research for all information publicly available concerning the company. Prior to making any investment decision, it is recommended that readers consult directly with Forum Energy Metals and seek advice from a qualified investment advisor.