This E-Tech Resources profile is part of a paid investor education campaign.*

From color TV displays, GPS systems, fuel cells, to jet engines, fiber optic cables and MRI machines--rare earths are vital to technology and clean energy. One of the most important applications of REEs is in the green economy: REEs are used in electric car motors, lithium-ion batteries, computer hard drives, solar panels and wind turbines.

As the demand for REEs is expected to increase by a CAGR of seven percent by 2030, the focus is shifting towards developing a supply chain outside of China. In 2021, China provided more than 85 percent of the world's rare earth supply and the country has already begun reducing exports and increasing prices. As a result, companies developing rare earth compound projects outside of China may present an interesting opportunity for investors.

E-Tech Resources (TSXV:REE, FSE: K2I) is developing a high-grade rare earth elements project in the top-tier and mining-friendly country of Namibia. The company is committed to a strong sustainability model through strict adherence to ESG policies, and is positioned for high growth given its cost-competitive processing strategy relative to its peers. 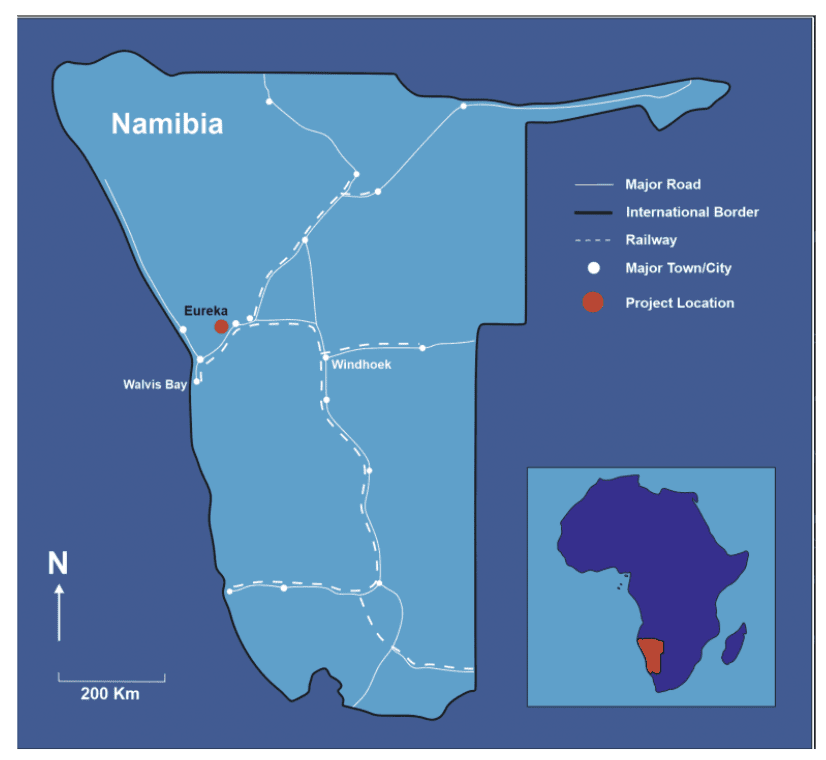 The company's fully-owned flagship Eureka project is a high-grade rare earth element project located in the Erongo Mining Corridor of Namibia. The Eureka project has a maiden inferred resource of 310 kt at 4.8 percent TREO with grades ranging from 1 to 16 percent. The company believes there is strong potential to increase the inferred and indicated mineral resource by at least 0.5 to 1.5 million tonnes based on a technical scoping study.

E-Tech Resources' Eureka project is strategically located near several mines and projects, including Rossing Uranium's Rossing Uranium mine, QKR's Navachab Gold mine, Namib Lead and Zinc Mining's Namib Lead and Zinc mine, and AfriTin's Uis mine. Eureka has excellent infrastructure and access to a major highway, a railway, roads, power, water and skilled professionals.

Early metallurgical testing at the Eureka project has indicated the potential to be one of the simplest REE projects to process in the world. The company anticipates that its first marketable product will be equal to more than 65 percent TREO in mineral concentration based on current known grades and high recoveries. As a result, E-Tech resources believes the Eureka project may soon provide the basis for a cost-competitive, profitable and high-growth model for the company.

E-Tech Resources is committed to maintaining the highest standards of ESG policies to sustainably supply the green economy and adheres to the guidelines of the United Nations' Sustainable Development Goals. E-Tech Resources plans to create a sustainability committee to guide its ESG efforts, and will be conducting further environmental and social impact assessments as part of ongoing feasibility studies to maintain responsible sourcing. E-Tech Resources' Eureka project is currently expected to have no major negative socio-environmental impact on the region.

The Eureka project is a fully-owned, high-grade rare earth element project located in the Erongo Mining Corridor of Namibia. The property is approximately 250 kilometres northwest of the capital city of Windhoek and is accessible via a major highway, road and rail with access to power, water, skilled professionals and Namibia's largest commercial port. The project neighbours several mines and projects including Rossing Uranium's Rossing Uranium mine, QKR's Navachab Gold mine, Namib Lead and Zinc Mining's Namib Lead and Zinc mine, and AfriTin's Uis mine.

The Eureka project has a maiden inferred resource of 310 kt at 4.8 percent TREO (NI 43-101). The in-situ dyke grade ranges from 1 to 16 percent TREO on the property. The company expects to grow further and believes there is strong potential to increase the inferred and indicated mineral resource of 0.5 to 1.5 million tonnes based on a Technical Scoping Study (SRK) from its previous drilling campaign. The company has been able to obtain a high concentration of REE from a high recovery due to the presence of simple mineralization with low levels of radiation.

E-Tech Resources is currently in the process of conducting further exploration on the property and planning future work programs based on assay results to confirm its total resource in a timely manner. 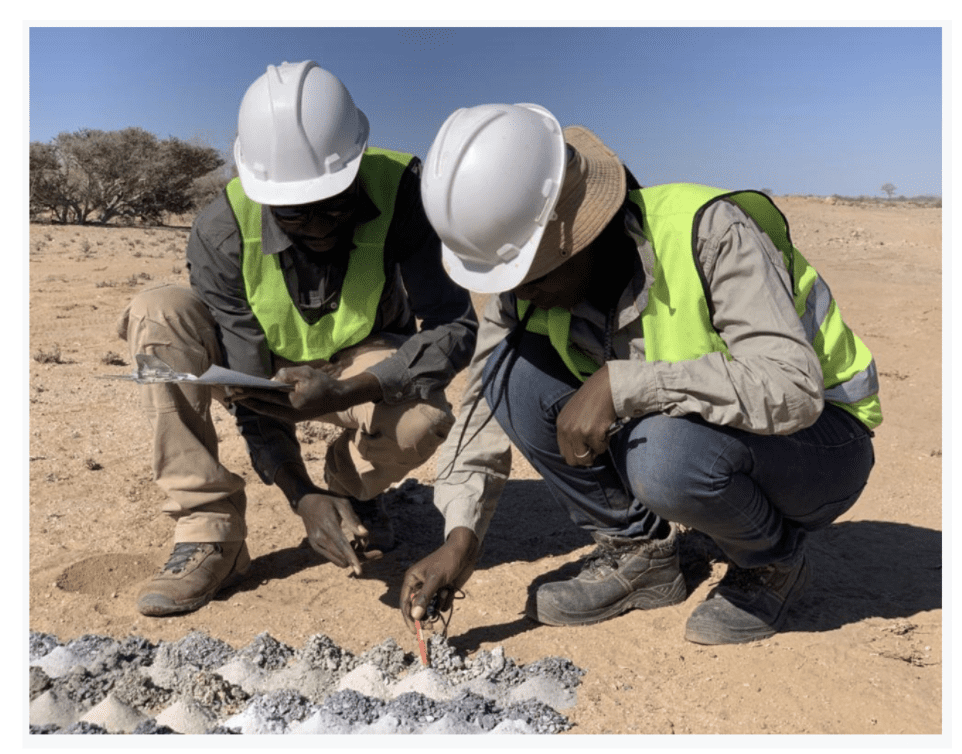 Elbert Loois brings over 20 years of management and consulting experience in business development, M&A and sustainable supply strategy within the raw materials, automotive and clean technology industries. He has extensive experience in developing sustainable supply and off-taking strategies. He has worked with international OEMs and tier-1 suppliers to develop critical material supply strategies as the head of business development of the Resource Alliance.

He has also served as CEO of the largest German mining consulting company DMT-IMC. Loois has been responsible for the portfolio management of international mining projects at RWE Power. Furthermore, he worked as a senior mining engineer in opencast mining and underground projects. Loois was also the R&D manager for operational mining technology.

Rob Randall has served as a contract CFO for several TSXV-listed companies and has extensive public company financial experience. Randall currently serves as the chief financial officer of Torrent Capital (TSXV:TORR), Sona Nanotech (TSXV:SONA) and Antler Gold Inc. (TSXV:ANTL). Randall was the corporate controller of Etruscan Resources Inc. from 1997 to 2011. At Etruscan Resources Inc., Randall oversaw the financial operations for all aspects of its gold exploration and production activities throughout West Africa as well as its diamond operations in South Africa. He also served as controller of Nova Gold Resources Inc. from 1997 to 2001.

Chris Drysdale is an experienced professional with international experience in the mineral and exploration industry. He currently serves as vice president of operations and corporate development for Antler Gold Inc. (TSX.V:ANTL). Antler Gold Inc. is a gold exploration company focused on the acquisition and exploration of gold projects in Namibia. He has previously served as the Kenyan country manager for Stockport Exploration. At Stockport Exploration, Drysdale oversaw the operations for all aspects of its gold exploration and production activities throughout East Africa. Before that, Drysdale worked as a field exploration geologist for Remote Exploration Services (Pty) Ltd. Remote Exploration Services Pty Ltd. is a geological consulting firm based out of South Africa servicing all aspects of the mineral industry. Drysdale has a progressive and diverse background with extensive work experience in Namibia. He has been involved in various mineral projects throughout Africa.

Dan Whittaker is the CEO of Antler Gold Inc. (TSXV: ANTL) and has held senior positions in the mineral industry for the last 20 years. Most recently, he was a founder of GoGold Resources Inc. which is a mineral exploration, development and production company. Whittaker held senior management positions with GoGold from January 2008 to January 2016. He also served as a director of GoGold from inception to January 2013. He founded Ucore Rare Metals Inc. in 2006 and served as an officer and director until March 2008.

Ken Marshall has extensive experience in the information technology and telecommunications sectors, having served in various positions at Rogers Communications throughout his career. Marshall was the senior vice president of national residential marketing for Toronto. In this role, he led the wireline marketing group in the launch of the Ignite platform. He also served as the regional president for the Atlantic region and the vice president of the enterprise business unit at Rogers Communications.

Marshall has spent his post-telecommunications time working with emerging start-up organizations. He serves on the boards of several companies, including Genesis which is Newfoundland and Labrador's primary innovation hub and incubator, Celtx which is an online platform for film, video and game production, eXeBlock Technology Corporation which focuses on opportunities in digital identity and authentication and Metricsflow, which is a B2B platform focused on enhancing website attribution.

Edward Loye has worked on the characterization of REE deposits for 8 years, notably in Namibia as a member of staff at Camborne School of Mines at the University of Exeter in the UK. Loye has developed an extensive network across the REE supply chain. Loye played a key role in securing £2.7 million in 2014 from the UK Government for REE research within the SoS RARE Programme.

Loye managed the academic and industrial collaborators across this international consortium of REE experts. In 2015, he co-founded E-Tech Metals to pursue and strategize the geological delineation and perspectivity of the Eureka Project in Namibia. Loye has since instigated metallurgical test work and managed the drilling and trenching campaigns on site.

John Philpott is the founder and CEO of CanAm Physician Recruiting Inc. CanAm Physician Rescruiting Inc. has been the leading physician recruitment and placement company in the Canadian and international markets for more than two decades. Philpott led the executing team through a successful public listing for Canabo (TSX.V: CMC). In 2018, Philpott managed the merger of Canabo with Aleafia Health Inc., (TSX.V: ALEF) in a transaction valued at $40 million. The transaction resulted in a combined operation with a market capitalization of over $200 million at the close of the merger. Phillpot is also a skilled negotiator. In less than two years Phillpott scaled the company from 1 Toronto clinic with 2 part-time physicians to 24 clinics across Canada. As CEO of CanAm Physician Recruiting Inc., Phillpott consults with physicians, hospital administrators, government officials and private clinic owners.

The information contained here is for information purposes only and is not to be construed as an offer or solicitation for the sale or purchase of securities. Readers should conduct their own research for all information publicly available concerning the company. Prior to making any investment decision, it is recommended that readers consult directly with E-Tech Resources and seek advice from a qualified investment advisor.