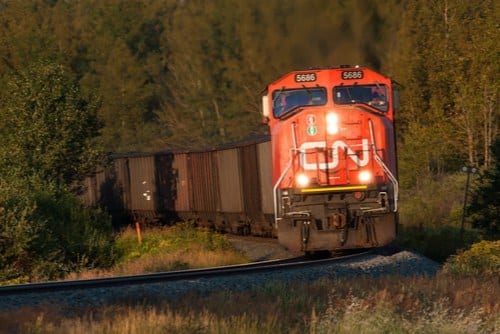 Transportation of oil by train has ballooned in Canada over the last 12 months. It is estimated that 200,000 barrels of crude were shipped in June 2019, a recordsetting number.

As the CN Rail (TSX:CNR,NYSE:CNI) strike stretches into day two, the price of Western Canadian Select crude has fallen sharply, losing US$7.87 since Friday (November 15) to sell for US$33.35 a barrel on Wednesday (November 20).

Delayed pipeline builds and expansions have left Canada’s oil sector dependent on rail lines to move the fuel across the country and continent.

Transportation of oil by train has ballooned in Canada over the last 12 months — it is estimated that 200,000 barrels of crude were shipped in June 2019, a record-setting number.

The railways, which CN has dubbed the “true backbone” of the economy, carry some C$250 billion worth of goods annually.

The strike is the latest negative news to hit the Canadian oil sector, which has been grappling with falling prices and growing oversupply.

The Canadian Association of Petroleum Producers, a lobbying group established by the industry, is worried about the impact the strike will have in the long term on the floundering sector.

“The oil industry is concerned about any developments that can negatively impact the availability of rail capacity, particularly in light of the current shortage of available pipeline capacity relative to oil production in western Canada,” wrote Ben Brunnen, vice president of oil sands, fiscal and economic policy, at the group. “We will be monitoring such developments carefully to assess their potential impacts on Canada’s global competitiveness.”

The energy sector isn’t the only industry carefully tracking negotiations with bated breath.

Canadian miners and explorers are also hoping for a speedy resolution to the dispute. In fact, the Mining Association of Canada (MAC) has proposed that the government introduce binding arbitration in order to fast track an end to the action.

“In the minerals and metals sector, experience has demonstrated that a rail stoppage significantly impacts the ability of companies to bring essential inputs to their mines, and the ability to move mineral products and by-products to down-stream customers,” said Pierre Gratton, president and CEO of MAC.

“MAC members have advised that this strike will result in a severe reduction or elimination of railway capacity and will trigger the closure of mines with concurrent lay-offs of thousands of employees beginning in a matter of days.”

Safety, fatigue and work hours are some of the main points that drove more than 3,000 CN Rail employees off the job Tuesday (November 19) morning.

“CN currently requires (Teamsters Canada Rail Conference) members to operate trains alone from outside of the locomotive, hanging on to moving trains with one hand while operating a remotely controlled locomotive with the other,” notes a report from Teamsters Canada, the union to which CN employees belong. “Railroaders are expected to do this in rain and in freezing temperatures, sometimes for distances of up to about 17 miles.”

Last Friday, CN confirmed it was laying off workers across North America, citing a deterioration in rail demand across the continent.