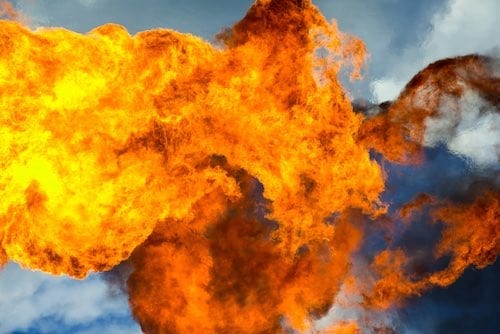 This week’s attack was an escalation in a series of clashes in the Middle East directed at oil infrastructure and transportation.

Recent events in the Persian Gulf saw 5 percent of the world’s daily oil production wiped out, triggering a spike in oil prices around the world.

The Saudi Arabian state-owned facility that was attacked accounted for half of the Kingdom’s production capacity of over 12 million barrels per day, and, according to Maplecroft’s principal Middle East and North Africa analyst Torbjorn Soltvedt, the impact of the attacks is going to be felt much longer after the damage has been repaired.

“There are a couple of problems that perhaps aren’t being priced in as much as they should be, and one is of course the risk of further attacks,” said Soltvedt.

The September 14 attacks represented an escalation in a series of attacks and clashes in the Middle East directed at oil infrastructure and transportation.

Speaking with the Investing News Network (INN), Soltvedt said that the attacks had exposed a vulnerability in the world’s oil supplies that was likely to remain in the current situation between Saudi Arabia, Iran and the US.

Soltvedt said that in looking at potential next steps for Saudi Arabia, Maplecroft modeling was pointing toward further attacks staying on the radar.

“The common theme there is that in all of the scenarios there’s still the ongoing risk of further attacks even if (Saudi Arabia) decides to do nothing at all, which has been very much their approach.”

He explained that the Kingdom had two courses of action available, neither of which were ideal.

“They have to either completely neutralize that kind of asymmetrical threat that Iran poses, which is not something that can be done overnight … (or) the other alternative is to address the root cause of the tensions — so come up with some kind of diplomatic solution.”

That diplomatic option, said Soltvedt, was not ideal, because both the US and Saudi Arabia did not want to be seen as appeasing Iranian aggression.

Commodities analyst at Scotiabank (TSX:BNS,NYSE:BNS) Rory Johnston said that most intelligence being released on the attacks was pointing towards a connection with Iran, which meant there was an open question on whether or not there would be a forceful retaliation.

“I would say that as of this morning (September 18), the risk of that is slightly lessened because the Saudis are talking of bringing in UN investigators, and that means it will take a bit longer and naturally cool down tensions as time does.

“On the other side you have the United States announcing a new round of sanctions,” he said, though he noted that Iran’s exports were already being crushed by previous sanctions so there was little they would achieve in addition — but it was still pointing towards a non-military option.

“I think the White House leaning on sanctions rather than any kind of, call it, ‘kinetic response’ is promising from the direction of there not being any military engagement there.”

While Saudi Arabia has been talking about repairing the damage and bringing production back to pre-attack rates by the end of September, Soltvedt concluded that, currently, it was Maplecroft’s position that the situation in the Gulf was only going to get worse before it could get better.

With accusations thrown against Iran being vehemently denied, when asked for his thoughts on who carried out the attack, Soltvedt said that the characteristics of the attack pointed towards a state actor due to the timing and targets.

“I think one thing that’s clear is that whoever carried out the attack knew exactly how to cause maximum disruption to Saudi oil infrastructure … All of those factors put together makes Iran very much stand out as the most likely culprit.”

Because of the Gulf’s role as a major exporter for oil, Soltvedt said that it was too early to say what effect tensions or conflict between Saudi Arabia and Iran would have on the region’s overall oil industry, but more risk needed to be priced in.

“It’s fair to say the risk has been underestimated so far … The threat against energy infrastructure hasn’t been taken seriously enough.”

He said that most companies operating in the region would be waiting to see how events played out, and due to the extent of the oil infrastructure in the region, global consumers elsewhere couldn’t just switch to other suppliers overnight.

“(Events) could accelerate a trend, (and) it could cause key importers to look at import security a lot more carefully than they have in the past.”

That trend is the world’s efforts to reduce dependence on oil from the Middle East first triggered by the OPEC oil embargo of the 1970s that caused a recession and inspired oil consumers to find new sources of oil — such as in Alaska and Canada.

Johnston said the same about the risk premium, saying that there would be a big impact because the vulnerabilities of the global oil market had been laid bare.

“As of right now there are people that look to do the Kingdom of Saudi Arabia harm and the easiest way to do that is to hit at its oil infrastructure, and yet it has not shown an ability to fully rebuff those attacks.”

He noted, however, that the Kingdom would be spending time and money looking to increase security of its facilities, and it was less likely that they would be caught off guard in the future, even if it was very difficult to defend against the type of attack that was carried out.

“The market’s going to need to begin pricing in some kind of insurance. Historically we’ve thought of it as a historical risk premium. But that risk premium before these events was negligible if not zero flat-out.”

When asked about investors potentially going somewhere else given the now laid-bare vulnerabilities of the Middle Eastern oil market, Johnston said that a higher political risk premium meant that investment would likely increase elsewhere.

“I think conversations around security are going to start rising to the fore again, which has traditionally benefited jurisdictions like Canada which is seen as a very politically secure allied backdoor producer to the United States.”

Speaking of the rest of the world, Johnston said that energy security issues like the ones being discussed now were part of how initial proposals for Keystone XL were first pitched in North America.

He said it was still too early to know how the investing landscape could change. “But all else equal, it raises investor interest in the Canadian space, but that will take time for that to move through the portfolio inflows and new capital in the space … That type of thing takes time, but a sentiment shift is the first step, and I think that’s what we’ve seen.”

Canada is locked away though, according to Tim McMillan, who is president and CEO of the Canadian Association of Petroleum Producers (CAPP).

“We may not have terrorists risks in the same way that the Middle East does, but we have had foreign activists that have limited our ability to put infrastructure in place that could allow us to reach these new markets.

“As countries around the world are probably assessing their supply sources … they can look at Canada, but there is no ability to get our substantial resources to them,” he said.

“Those are self-inflicted wounds here in Canada, largely based on successful campaigns from foreign activists to limit our pipeline infrastructure, to cancel Northern Gateway (rejected in 2016 by the Trudeau Government), to cancel energy east (cancelled in 2017 by TransCanada (TSX:TRP)), to stall Trans Mountain. Any one of them could have given us very substantive access to those global markets for times just like this.”

When asked whether events abroad could increase pressure on the Canadian government to approve petroleum infrastructure investment projects, McMillan countered that pressure from activists wouldn’t stop regardless of events overseas or Canadian political will.

“I don’t think that their interests will have shifted from this. Their interests have always been based on Canadian production with blinders on to the Middle East and other sources that have had substantial growth in their production.”

Looking ahead, McMillan said he was confident that eventually the Canadian petroleum industry would be able to free itself from what he called foreign activism, it had the capacity to fill any void left by events abroad.

Alberta Premier Jason Kenney clearly feels the same way, hitting the airwaves on Tuesday to talk up the withheld potential of the province.

The attacks triggered the largest daily spike in oil prices since the first Gulf War in 1991, and represented the largest ever single disruption to the oil market, but Johnston said that the attacks wouldn’t result in a huge volumetric hit to the market.

“What we’ve seen and heard from Saudi authorities since then and from authorities at Saudi Aramco … is they’ve been very firm about their ability to quickly bounce back and basically not lose a ton of production — they’re going to fulfil customer orders regardless.”

He explained that they would do that by tapping into spare capacity, doing some quick repairs and meeting the balance by using commercial and strategic inventories.

As on September 19, oil was trading at US$58.35 barrel — still above its pre-attack level of around US$55 a barrel but below its spiked value of almost US$63.

Going forward, Johnston said that the attacks could push oil markets from being bearish due to concerns over a global slowdown and the US-China trade war to being bullish.

“(The attacks are) a counterweight, something that’s going to push up potential premium pricing on the supply side,” said Johnston.

At the same time, he added that America and Saudi Arabia leaning more towards sanctions on Iran’s economy instead of direct military action means could have a counteracting bearish affect on oil prices.

On where the market could go from here, Johnston stressed that we were still in the very early stages of the event and there was a lot of information still unavailable.

“I think that the market is going to be tracking both how this rolls out in terms of repairs and the timeline, but also how the knock-on security ramifications develop.”

Another thing to watch out for, said Johnston, was that all of the world’s spare oil production capacity was up in smoke. “We don’t have any spare capacity left in the market, so if there was another attack, heaven forbid, now there wouldn’t be anything we could tap into to offset that.”