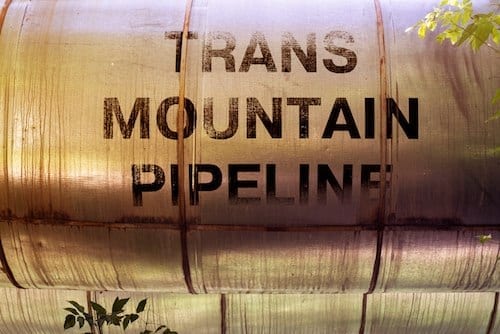 The expansion is expected to almost triple the current capacity of the pipeline from 300,000 barrels per day to 890,000 barrels.

Canada’s Liberal government has okayed an expansion for the Trans Mountain pipeline. It will be built alongside the existing pipeline between Edmonton, Alberta and Burnaby, British Columbia.

Aside from upping the pipeline’s capacity, the project also includes funding for an addition at the Westridge Marine Terminal in Burnaby, allowing the port to accommodate 34 oil tankers per month, instead of the five its capacity allows for now.

The pipeline has been in various stages of talks over the last five years, and has been a contentious issue for Albertans and British Columbians. The former view the expansion as critical for Alberta’s economy and the latter have voiced concerns over the environmental impacts of the 1,147 kilometer project.

In what may be construed as an effort to appease BC voters during an election year, Prime Minister Justin Trudeau also announced that every dollar the federal government earns from this project will be invested in Canada’s clean energy transition.

We have a responsibility to ensure that the decisions we make today move us toward a cleaner, sustainable economy. Major resource projects can move forward, but only if we do so in a way that protects the environment and respects Indigenous rights. The TMX project is a significant investment in Canadians and in Canada’s future that will create thousands of good, middle class jobs, maintain the highest environmental standards, and fund the clean energy solutions that Canada needs to stay competitive on the global stage.

Ottawa estimates that additional corporate income tax revenues from the project could generate C$500 million per year once the project has been completed. Any profit from the future sale of the pipeline will also be invested in clean energy projects around the country.

The construction phase of the project will create 15,000 new jobs in both provinces.

During a stop at the Calgary branch of the Economic Club of Canada on Wednesday (June 19), Finance Minister Bill Morneau spoke to business leaders about his party’s decision to approve the project.

He cited the benefits the expansion offers residents in both provinces and to the rest of Canada.

“By proceeding with the Trans Mountain Expansion project, we’re putting Albertans — and all Canadians — in the best position to succeed,” Morneau told attendees. “The revenues that will come from getting Canada’s resources to global markets will create jobs, grow the economy, and allow us to invest in new ways to reduce emissions and protect the environment.”

Increased capacity for both the pipeline and port will allow Canadian oil to reach a much larger market, allowing for more money to be generated. The country has its eye on supplying the energy fuel to markets in Washington state, China, South Korea and Taiwan. There is also the potential to tap into secondary markets in the US, like California, Hawaii and Alaska.

Proponents argue that the expansion will remove the current need to use trains to supplement pipeline transport, which is tedious, polluting and dangerous.

This isn’t the first time the federal government and the Trans Mountain pipeline have made headlines. Last May, the Trudeau Liberals paid C$4.5 billion to Kinder Morgan Canada (TSX:KML) to purchase the project, a move critics viewed as foolhardy and a waste of taxpayers’ money.

No word yet on when construction is expected to begin on the pipeline expansion.