Magnis Resources (ASX:MNS) is pleased to present its Quarterly Activities Report for the period ended 30 June 2018.

Magnis Resources (ASX:MNS) is pleased to present its Quarterly Activities Report for the period ended 30 June 2018.

Magnis has announced its participation in global consortiums, including ownership, to operate lithium-ion battery gigafactories in Australia, the USA and Germany. As a member of these consortiums, Magnis’ role will be to provide raw materials and associated technologies to assist in the production process. The Company is also involved with the development and ultimately mining natural flake graphite for use in various industries, including batteries for storing electrical energy.

The major activities announced during the past quarter are summarised in this report.

Imperium3 New York (iM3NY) has made solid progress on its New York Gigafactory project with the relocation of the battery plant from North Carolina, whereby Magnis now has an overall 44% direct and indirect shareholding through the IM3 Global Consortium.

Co-ordinated mobilisation efforts toward the disassembly, packaging and shipment of recently acquired equipment from a manufacturing plant located in North Carolina to the iM3NY facility at Huron Campus, the birthplace and former headquarters of IBM in Endicott, New York are well progressed. The Company is pleased to advise that these works programmes are all on-target and continue to advance according to plan.

Further, the development of design specifications for prismatic cells and related manufacturing processes are well underway at C4V’s Development Centre at the State University of New York in Binghamton.

During the process, iM3NY with the assistance of Magnis, are working closely with all relevant equipment
manufacturers to accelerate the mobilisation and re-engineering works programs to deliver the optimum outcomes
for all stakeholders.

Figures 1a and 1b : Lithium-ion manufacturing equipment undergoing disassembly process and being packaged with extreme care for the move to New York

The mobilisation process began in North Carolina in April of this year and is on track for completion within the next 1-2 weeks. All battery plant equipment is expected to be delivered by early August to the iM3NY facility in the Huron Campus Facility.

Figures 2a and 2b : Lithium-ion cell manufacturing equipment on floor and after disassembly and packaged for shipment

Figures 3a, 3b, 3c : Equipment after packaging, while loading for shipment to New York factory from North Carolina

As an integral and strategic element in planning and executing the acquisition of Lithium-ion Battery (LIB) manufacturing equipment in February 2018 (Refer to ASX Announcement on 8 February 2018), iM3NY is committed to diversifying its product offerings to include prismatic cells in addition to its original cylindrical cell product lines.

Each product requires ongoing reviews of the design, as well as careful validation and qualification of components that are required to build a single cell of a LIB. Thus, through the auspices of a highly capable and experienced team at C4V’s Development Centre in Binghamton, New York, the consortium has attained extremely satisfying outcomes in the last few months in terms of optimising cell design for drop-in integration to the new production line acquired, as well as achieving equally satisfactory performance targets from the Company’s qualified supply chain partners.

Senior Imperium3 executives have undertaken numerous investor meetings during the quarter, some of which have included site visits to the Huron campus where iM3NY is establishing its New York manufacturing presence. Further, the consortium has hosted visits by large European and United States based OEM’s to the facilities to inspect the significant progress first hand.

With all equipment expected to be delivered at the New York facility within the coming fortnight, iM3NY plans to organise additional site visits catering to potential partners across the investment communities of Australia, Europe and the United States.

Further, the Company advises that offtake discussions are continuing with highly prospective customers. iM3NY expects to enter into definitive agreements with these potential partners and anticipates first production from the New York plant in the first half of 2019.

About the Imperium3 Global Consortium and iM3NY

Members of the Imperium3 Global Consortium (Charge CCCV (C4V), Magnis and Boston Energy and Innovation) have been working together for the last 3 years to develop a sustainable supply chain to produce lithium-ion batteries across the globe in multiple locations.

The first USA project, “Imperium3 New York” has received New York State Government support, partial funding and other financial incentives to build the first Gigafactory (15GWh per year LIB) for lithium-ion battery cell production in New York. With this support, first production for a 1GWh line is planned for mid-2019 from iM3NY’s Endicott, NY facility on the Huron Campus.

The consortium has unique and patented lithium-ion battery intellectual property. Its members have been involved in battery production with the requisite, knowledge, experience, expertise and capabilities for lithium-ion battery manufacture from raw materials, to particle engineering, to systems electronics, to cell/battery manufacturing. At the management level, in addition to the highest-level battery expertise, the consortium comprises successful senior executives in all disciplines from a variety of multi-national companies.

The consortium’s objectives are to establish new capacity of lithium-ion battery manufacturing from outside the Pacific Rim. The organisational structure will be grown to enable the necessary and critical agility for rapid commercialisation of new lithium-ion battery technologies, including support for open innovation that is necessary for sustained high performance and low-cost battery products. 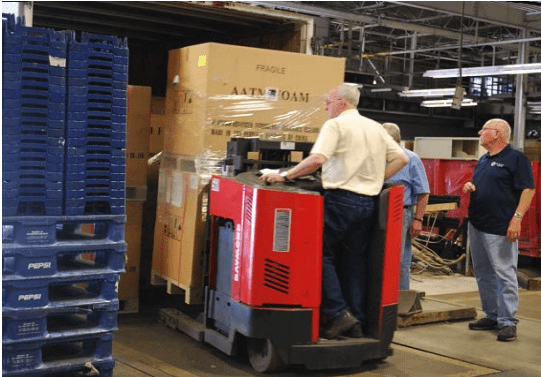 As announced to the ASX on 5 June 2018, new project partners including SIEMENS, Celgard, Probuild, Norman Young & Disney, Ausenco and WT Partnership joined the Imperium3 consortium to assist with project delivery and $3.1 million was committed in funding from the Queensland Government towards the feasibility study of the planned lithium-ion battery plant in Townsville. 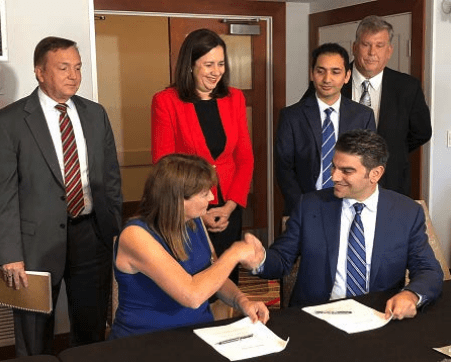 The committed funding allows for a feasibility study and detailed engineering work programs to begin immediately. The work will be carried out by key project partners that are also expected to be involved in the subsequent construction of the project, enabling the development to be fast tracked once an investment decision is made.

The NGP in Tanzania continues to steadily progress through the project requirements embracing the inclusion of the Special Economic Zone (SEZ) and Export Processing Zone (EPZ) into the broader project and the adjustment from recent legislation changes. The broader Magnis involvement in battery manufacturing and what the SEZ/EPZ will generate to Tanzania has been very positively received by the Government due to the fact that substantial value addition will be made within the country in-line with the policy of Tanzania. The Mining Commission upon which most mining and processing development requires consultation, is settling down to business.

During the quarter, activities continue with essential preparations for the SEZ/EPZ including on-ground demarcation of boundaries and engineering planning and revised design inclusions. The Company continues to
foster goodwill and respect within the local community with a continuation of planning and programs addressing access to learning material through a central library supporting the district schools. An increased education for local students will provide a more valuable workforce for future operations. The local villages and district government has been very supportive to the project and understanding of delays encountered whilst the Company addresses the revised legislation requirements.

Subsequent to the quarter end reporting period, the Company announced to the ASX on 20 July 2018 that Magnis and exclusive partner, Charge CCCV (“C4V”) noted that joint testing programs on the commencement of lithiumion battery manufacturing are well advanced. Magnis and C4V have made significant progress in qualifying patented next generation materials for leading battery performance and commercial supply chain partners.

Recent test programs utilising silicon enhanced graphite anode materials have delivered major advances in both anode performance and the cost of its manufacture. In particular, the patented nanostructure silicon composite material can now be manufactured at a significantly lower equivalent cost to graphite after allowance for its increased capacity.

Supply chain qualification for commercial integration benefits include:
• First cycle lithiation capacity of 623+ mAh/g, a 80% improvement on the energy density performance of existing graphite-based anode material;
• A first cycle efficiency of >89% without any pre-lithiation;
• Greater than 98% capacity retention after 35 cycles

In general terms, 80% more capacity translates to approximately 30% more distance covered by a vehicle using a similar battery pack size, when compared by dimensions. For example, an average Tesla battery has a range of approximately 450km and the results achieved here would allow the same size battery pack to achieve 600km.

The Company has received significant levels of interest from leading anode suppliers for the silicon graphite anode blend. Samples and results are currently being shared with these parties.

Original Equipment Manufacturers qualification has also begun with battery cells being recently sent to OEM’s in the United States. Larger volumes of samples are being prepared for delivery and will be sent to European OEM’s later this quarter.

Discussions to date have been promising and the Company expects to reach an agreement before the end of the calendar year.

Magnis and C4V Generation 1 and Generation 2 cathode technologies have received interest from groups within the battery industry and potential new entrants to date. Generation 1 cathodes, which will be ready for mass production in the near term, do not require any cobalt or nickel and have much higher capacity than phosphate (such as LFP) or oxides (such as NMC, NCA, LMO). Generation 1 cathode BM-LMP has been tested on commercial size (several Ah) cylindrical as well as pouch form factors. Generation 2 is targeted towards higher energy density (~300Wh/kg) and higher temperature stability (no cooling until 65°C). Testing for Generation 2 remains ongoing and the Company will provide an update to shareholders as developments materialise.

The Company is exploring opportunities presently for its funding alternatives to provide an adequate capital base level for the future, as the Company continues its focus on the lithium-ion battery factory strategy (with the New York Gigafactory scheduled for first production next year) including the responsibility for the end to end supply chain in sourcing the raw materials and associated technologies for lithium-ion battery cells.

As per the announcement made to the ASX on 25 July 2018, potential investors, both domestic and international are currently undertaking various forms of due diligence with a view to making an investment in Magnis. Cornerstone investments form part of this interest and discussions are continuing and the Company is aiming to be in a position to announce a definitive investment this quarter.

Mr Peter Sarantzouklis resigned as a director of the Company on 16 April 2018.

Click here to connect with Magnis Resources (ASX:MNS) for an Investor Presentation.